Start your journey here, listen to me on Spotify

The site is currently under construction, so some material is only available in the VIP section. Contact me if you want info on how to get access! :)

I made a personal version of Toto's fantastic song "Lea". It's a bit more modern in the sound but I still try to stay somewhat basic. Have listen and let me know what you think.
Lea

i just finished writing this instrumental piece and recorded it on a Bösendorfer grand piano.
Epiphany

A song with the most romantic lyrics is out now! Click underneath to listen!
Listen

Instrumental on the way!

On March 11 the new song Gachi is out worldwide on all digital platforms. I'm honored to have a couple of worldclass guest musicians on this instrumental song. Jocke Wickström, who also appeared on "The Wonder Session" album as trumpet player and arranger of the horn section is playing the melody on this song. I'm also joined by the great P-O Nilsson,who laid down all the keyboards on The Wonder Session.This time he picked up a fretless bass and gave a fantastic performance as always.
So don't forget, Gachi on March 11.
You can already pre-save the song on Spotify here: https://distrokid.com/hyperfollow/peterkisch/gachi-feat-jocke-wickstrm--p-o-nilsson

My new single "A Little Thing Called Life" is available worldwide on all media platforms. It's a song by the Steve Dorff and Linda Thompson and a tribute to one of the best singers of all time, Mr Warren Wiebe. I hope you like it!
Watch it here right now!
​
I'm producing, singing and playing all instruments on a very special song for the upcoming Fanfields 3 album. I'm also singing on another great song on that album
​I believe you'll be able to preview it pretty soon.

​Recording one of the greatest hard rock classics ever, assisted on guitar by the out of this world guitarist Jörgen Birch Jensen and Michael Riesenbeck (Fanfields producer)

​​Performing live every Monday, Tuesday, Wednesday here on my website and on Facebook, Youtube and Twitch! Always at 20:15 CET. Check me out right here!
​
Worldwide release of the new single "The Border" on all media platforms! Listen on Spotify, Soundcloud etc right now!Listen
Tune into iTunes, Napster, Tidal, Amazon etc.
​
Working in the studio on an album with hard rocking songs together with a fantastic producer, for release hopefully 2020. Very excited!

Follow me on Spotify to get the latest releases!

It's out there, available for digital download in stores worldwide and streaming on Spotify,Tidal, iTunes etc!
​Click the button below for more info!
You're The Voice
Learn More
The Wonder Session CD! 14 soulful songs!
​Click on it to get your copy! 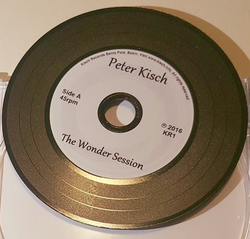